‘The re-contextualization or transformation of an image stands at the center of Rik De Boe’s charcoal drawings. Humble in scale, the works utilize a point of departure embedded in collective memory. The pictorial details depict ordinary yet powerful visual triggers derived from movie stills, daily objects, and so forth in the service of the black and white modulation—leaving memorabilia rather than drawings. Like Xerox copies of our collective consciousness de Boe’s realism reverses interpretation and manifests images as forensic evidence.’ 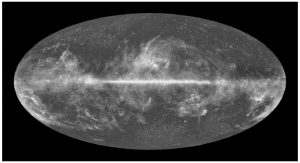 Rik, we’re on the sky map! Thanks to the satellite called Planck. Science found out that mankind and its Milky Way delimit the centre of the universe. What a useless but comforting thought. Our solitude couldn’t be more complete; infinity begins here with us and puts us in the limelight: I imagine other forms of life having fun watching us on huge projection screens.

I have often wondered how many cameras spread all over our planet simultaneously click. Or say tshack. Above Brice Canyon, at the gates of the Forbidden City, on the slopes of the Mont Blanc, under the ceiling of the Sistine Chapel, in Swiss living rooms: I listen to the deafening sound of all those motionless movements. Then I try to imagine the thus perpetuated scenes and the sight of the crazy collection they become part of. Thereupon I imagine all the possible actions a human being is capable of: sexual acts and violent deeds, birth and its consequent death, stirring in cooking pots, developing photographs, building a house to live in. This condition humaine (> R. Magritte) is already captured in the shutter speed. A fraction, I hear someone whisper. How short life is and how long art. Or how time irreparably flies. Time coagulates the actions captured by the tshacks: a recording as if of the dog of Pompeii, the fate of the crew inside the Koersk or the Chilean miners 700 meters below our feet.

In the story  ‘The Tram Race’ by F.B.Hotz (1922-2000), ‘a wonderfully beautiful, vibrating story of a race between protestant and the catholic villagers’, there is this remarkable case of a twist of time. ‘The race between the two steam trams, with the two groups of peasants on both si